From Vatican City, 17 October 2015 (VIS) –  The programme was published for Pope Francis' apostolic trip to Kenya, Uganda and the Central African Republic, to take place from 25 to 30 November. 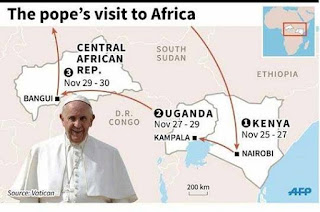 The Holy Father will depart from Rome's Fiumicino airport on 7.45 a.m. on Wednesday 25 November, destined for “Jomo Kenyatta” airport in Nairobi, Kenya, where he is due to arrive at 5 p.m. Following the welcome ceremony at State House, he will pay a courtesy visit to the president of the Republic and will meet with the authorities and diplomatic corps.
On Thursday 26 November, the Pope will attend an inter-religious and ecumenical meeting in the apostolic nunciature in Nairobi, after which he will celebrate Holy Mass on the University of Nairobi campus. This will be followed by a meeting with the clergy, men and women religious and seminarians at the St. Mary's School sports field. The day will conclude with a visit to the United Nations Office at Nairobi.
Friday 27 November will begin with a visit to the poor quarter of Kangemi in Nairobi, after which he will meet first with young people in the Kasarani Stadium, and then with Kenyan bishops. After the farewell ceremony at “Jomo Kenyatta” airport, the Pope will depart for Entebbe, Uganda at 3.30 p.m, where he will arrive at 4.50 p.m. 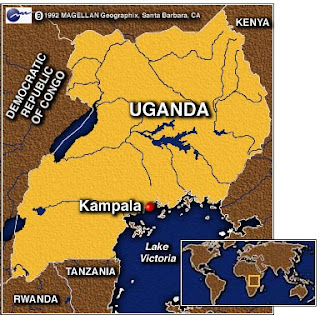 After the welcome ceremony at Entebbe International airport, the Pope will pay a courtesy visit to the president in the State House, and will meet the authorities and diplomatic corps in the conference hall. The third day of his apostolic trip will conclude with a visit to Munyonyo and greetings to catechists and teachers.
On Saturday 28 November, the Pope will visit the Anglican and Catholic shrines to martyrs in Namugongo, and will celebrate Mass for the martyrs of Uganda in the area of the Catholic shrine. After meeting with the young at the Kololo Air Strip at Kampala, he will visit the Nalukolongo House of Charity.
At 6 p.m. he will meet with Ugandan bishops in the archbishop's residence, followed by an encounter with the clergy, men and women religious and seminarians in the cathedral.
After a farewell ceremony at Entebbe airport, at 9.15 a.m. the Holy Father will depart for the Central African Republic, the third leg of his apostolic trip, where he is scheduled to arrive at the International “M'Poko” airport of Bangui at 10 a.m.
He will first pay a courtesy visit to the Head of State of the Transition in the presidential palace “de la Renaissance” and will meet with members of the governing class and diplomatic corps. This will be followed by a visit to a refugee camp and an encounter with the bishops of the country. In the afternoon he will meet with evangelical communities at the faculty of evangelical theology in Bangui, and will celebrate Mass with the clergy, men and women religious, catechists and the young in the cathedral of Bangui. He will then confess some young faithful and, in the evening, will inaugurate a prayer vigil outside the Cathedral.
On Monday 30 November, Pope Francis will begin the final day of his eleventh apostolic trip with a meeting with the Muslim community in the central mosque of Koudoukou in Bangui.


After celebrating Mass in the Stadium of the Barthelemy Boganda Sports Complex, he will transfer to “M'Poko” International airport and at 12.30 p.m., following a brief farewell ceremony, he will depart for Rome where he is expected to arrive at Ciampino airport at 6.45 p.m.
Posted by don bosco Nigeria at 04:43