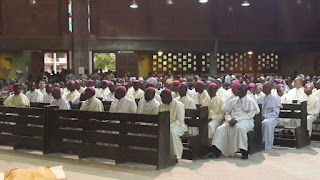 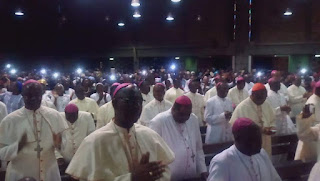 Prayers at the Shrine of Mary Help of Christians Akure 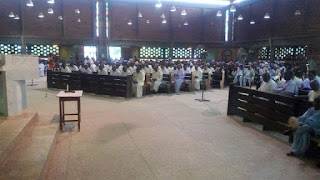 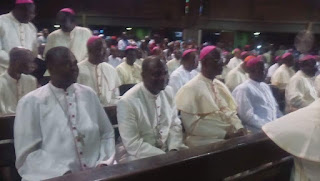 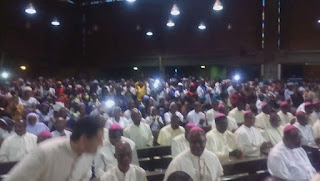 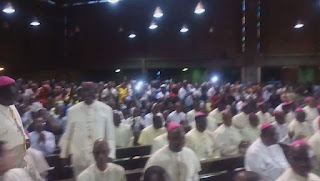 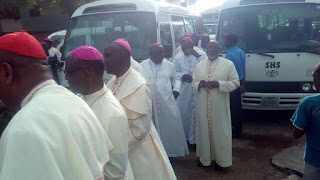 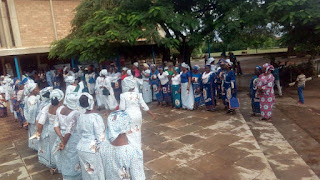 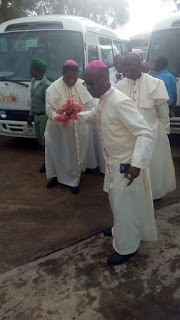 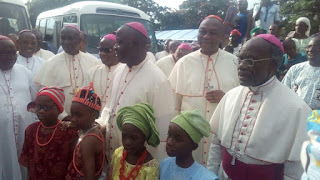 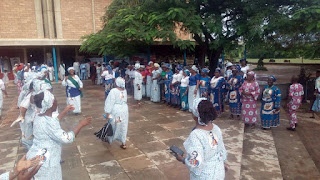 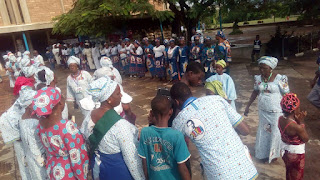 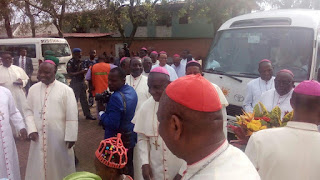 A Communiqué at the End of the Second Plenary Meeting of the Catholic Bishops’ Conference of Nigeria (CBCN) at Domus Pacis Pastoral Centre, Igoba, Akure, Ondo State, 8-16 September, 2016.

From The Catholic News Agency for Africa
http://www.canaafrica.org/index.php?option=com_content&view=article&id=735:bishops-in-nigeria-decry-holding-religion-hostage&catid=16:latestnews&Itemid=103&lang=en

1.                  PREAMBLE
We, the Catholic Bishops of Nigeria, held our Second Plenary Meeting of the year at DomusPacis Pastoral Centre, Igoba, Akure, from 8 to 16 September, 2016. Having prayerfully reflected on the issues affecting the Church and our country, we now present our Communiqué.
2.                  EVENTS IN THE CHURCH
In this Extraordinary Jubilee Year of Mercy, we express our heartfelt gratitude to God for his love and abundant blessings on the Church and our country, Nigeria. We witnessed on 30 June, 2016 the Episcopal ordination of Most Rev. John Akinkunmi Oyejola as Bishop of Osogbo Diocese. We thank God for a fruitful Episcopal ministry of the Bishop Emeritus of Makurdi, Most Rev. Athanasius Usuh. Bishop Usuhwas called to the peace of Christ on 14 July, 2016. We pray that his soul and the souls of all the faithful departed through the mercy of God rest in peace, Amen.
On 19March, 2016 His Holiness, Pope Francis, issued the Apostolic Exhortation on the Family, titled, Amoris Laetitia,The Joy of Love. According to the Pope, “Families are essentially not a problem; they are first and foremost an opportunity” (AL 7). As religious leaders, we are enjoined to generate common pastoral approaches to accompany those preparing for marriage and provide assistance to those who have entered marriage so that by faithfully observing and protecting their conjugal covenant they may day by day achieve a holier and a fuller family life (Canon 1063, §4).

3.                  FOUNDING OF INSTITUTES OF CONSECRATED LIFE
We acknowledge with joy the bountiful harvest of vocations, the inspiration of the Holy Spirit and efforts of persons desiring to establish institutes of consecrated life with a variety of charisms. While we observe that many of these associations are responding to the missionary mandate (Matt 28:18) in their respective apostolates, some still need to discern and understand more their charisms with specific precision in order to curb the rate of proliferation of associations of Christ’s faithful. We exhort all consecrated persons to persevere in living out their evangelical counsels of poverty, chastity and obedience. It is important to emphasize the imperative of collaboration between the consecrated persons, the diocesan clergy and the lay faithful.

4.           ABERRATIONS IN CATHOLIC WORSHIP
We are seriously concerned about the growing misguided sense of creativity and adaptation during liturgical worship.  Such innovations include: unduly lengthy Eucharistic celebrations, excessive monetary collections, and the near absence of silence and decorum during liturgical celebrations. We observe the arbitral alterations of the text, singing between the Gospel and Homily and indecent dressing on the part of the minister, and the lay faithful. Others are the exposition of the Blessed Sacrament as if it is a magical and theatrical display, and indiscriminate and indiscrete use of sacramentals.  These practices obscure the very essence of Catholic worship and are gradually eroding the true Catholic identity.  We are duty bound to correct these anomalies.  We insist that “Christ’s faithful have the right to worship God according to the provisions of their own rite approved by the lawful pastors of the Church…” (SacramentumRedemptionis 12; Canon  214).  In addition to genuine pastoral freedom, we re-affirm that the liturgical books, approved by the competent authority, are to be faithfully followed in the celebration of the sacraments (Can. 846, §1; SacramentumRedemptionis21).

5.                  RELIGION: RECIPE FOR PEACE AND DEVELOPMENT
We state unequivocally that religion is so crucial to the corporate existence and survival of Nigeria. Nonetheless, it is sad that religion is portrayed as one of the problems of the nation rather than a solution. This is because of the plethora of challenges plaguing our nation such as, unsolicited prophecies of some religious leaders that heat up the polity, the increasing number of self-serving pastors and persons ill prepared for leadership, founding churches and mosques, unedifying verbal altercations of adherents of different religious groups as they promote their narrow religious agenda. The wanton destruction of lives and property on account of religious beliefs and practices is inexplicable, irresponsible and therefore unacceptable.  We also condemn the irrational killings in the country in the name of religion. The offenders should be punished with the full weight of the law. Indeed, it is violence against true religion. For true religion brings peace, not tension; love, not hatred (James 1:27).
In this challenging time in our history as a people, we call for more concerted efforts in overcoming the spirit of unhealthy competition, suspicion, negativity and tenacious postures between Christians and Muslims. We urge all believers in the one True God not to relent in seeking the truth and upholding it.  Together we must liberate religion from the forces that have held it hostage. We invite all and sundry to make religion an instrument of peace and development through a more sincere and committed inter-religious dialogue, mutual respect and peaceful coexistence.

6.                  STATE OF THE NATION
Economic Recession in Nigeria
We note the efforts of the Nigerian government towards the growth of the nation’s economy. Yet, the economy has gone into a recession.  Many people have lost their jobs, and those who are fortunate to retain theirs are not adequately remunerated and some are not paid as and when due. There is hunger in the land. We therefore urge the government to take proactive and practical steps towards reversing the recession. As a result partly of the fall in the oil prices, it has become inevitable to, without further delay, diversify the economy, engender fiscal and monetary policies, stimulate and mobilize investments, and engage in a productive rather than a consumerist economy.  We advise the federal government to consider devolution of powers to create a healthy economic competition in the federating units. We call on Nigerians to moderate their taste for foreign goods, reduce waste and be more prudent in expenditure. In the meantime, we expect the government to quickly evolve appropriate palliative measures and empower, by job creation, the teeming unemployed youth.

Respect for Human Rights and Dignity
Our country is generally passing through an unfortunate phase whereby sanctity and dignity of human life is constantly undermined. People, especially women and children, are reduced to merchandise and trafficked within, across and beyond our country for sex exploitation forced servitude and organ harvesting. We denounce policies and practices that undermine the sanctity and dignity of human life. We also call on government to drastically reduce poverty and remove everything that condemns the less privileged to life of avoidable suffering and make them easy victims of human trafficking. We also call on government to protect the victims and bring to book the perpetrators.
We observe with dismay the growing inequality and lack of respect for basic rights in our nation. Cases of discrimination on the bases of religion, ethnic group and political affiliation still abound. This is evident in the recent government appointments and provision of social amenities. We enjoin governments at all levels to eschew all forms of marginalization and give everybody a sense of belonging. We equally call on Nigerians to respect one another’s rights including rights to life and religious freedom. We urge the government to use appropriate democratic machineries to protect citizens’ rights, reject and avoid making policies that would lead to the breach of these rights. For instance, curriculum reforms in the education sector should respect religious freedom, which includes right to promote one’s religious beliefs and doctrines without violation of the rights of others. We insist on the teaching of religion in all schools in such a way that no religion is disadvantaged. We therefore call on law and policy makers to adhere to the principles of state secularity, recognizing the multi-religious nature of our nation.

Curbing Violence in Nigeria
It is highly regrettable that our nation has continued to witness many forms of violent activities and cases of violation of human dignity. These include electoral and religious violence, mayhem caused by herdsmen, violence in the Niger Delta, extra-judicial killing, kidnapping, human trafficking, child abuse, and forced labour. We call on governments at all levels to devise adequate practical measures to tackle all forms of violence and assault on the human person. We condemn totally the acts of vandalization of oil installations in the Niger Delta and destruction of public property. At the same time, we enjoin the Federal government to address the root causes, and by dialogue and other peaceful means, end the crises in the Niger Delta. Similarly, we urge the government and security agencies to take decisive actions against the wanton destruction of lives and property by herdsmen, which pose serious threat to the security and unity of our nation. We lend our voice to those of other Nigerians calling for safer and modern ways of rearing cattle, for instance, ranches. We totally condemn the idea of grazing reserves and wandering of cattle.

7.                  CONCLUSION: PRAYER FOR THE NATION
We believe in the efficacy of prayer and indeed we have been praying for the nation.  For over two decades we have composed prayers and have been praying against bribery and corruption and for Nigeria in distress.  We invite all Christians and indeed all Nigerians to intensify their prayers for Nigeria especially in these critical times and work together for a better Nigeria. We implore all our people to be united with the Holy Father Pope Francis on Tuesday 20 September, 2016 in praying specifically for peace in the world marking the thirtieth anniversary of Assisi declaration. With the psalmist we say: “I sought the Lord, and he answered me; from all my fears he delivered me” (Ps 34:4).  Let us continue to pray and work for national renewal borne out of a true national repentance, conversion and rebirth.  In conclusion, we ask our Mother Mary Queen of Peace to intercede for us.