VATICAN CITY –  Pope Benedict XVI named six new cardinals on Wednesday, adding prelates from Lebanon, the Philippines, Nigeria, Colombia, India and the United States to the ranks of senior churchmen who will elect his successor.
Among them is Archbishop James Harvey, the American prefect of the papal household who was the direct superior of the pope's former butler, Paolo Gabriele. Gabriele was convicted Oct. 6 of stealing the pope's private papers and leaking them to a reporter in the greatest Vatican security breach in modern times. Harvey will now become archpriest of a Roman basilica. The Vatican spokesman denied he was being removed because of the scandal.
Benedict, 85, announced the new cardinals during his weekly general audience and said they would be formally elevated at a consistory Nov. 24. The nominations help even out the geographic distribution of cardinals, which had tilted heavily toward Europe in general in the last few consistories and Italy in particular.
With the new cardinals, there will be 120 cardinals under age 80 and thus eligible to vote in a conclave to elect a new pope. Europe still has the most, with 62. But with the new additions, the College of Cardinals is a tad more multinational: Latin America will have 21, North America 14, Africa 11, Asia 11 and Oceana one.
Aside from Harvey, the new cardinals are: Archbishop of Abuja, Nigeria, John Olorunfemi Onaiyekan; Archbishop of Bogota, Colombia, Ruben Salazar Gomez; Archbishop of Manila, Philippines, Luis Antonio Tagle; Patriarch of Antioch of the Maronites in Lebanon, His Beatitude Bechara Boutros Rai; and the major Archbishop of the Trivandrum of the Siro-Malankaresi in India, His Beatitude Baselios Cleemis Thottunkal. 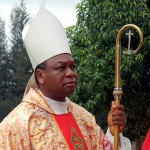 Onaiyekan was born in the town of Kabba, in what is now Kogi State, to Bartholomew and Joann Onaiyekan. He attended St. Mary's Catholic School in Kabba from 1949 until 1956, Mount St. Michael's Secondary School in Aliade, Benue State from 1957 until 1962, and Ss. Peter & Paul Major Seminary in Bodija, Ibadan from 1963 until 1965. He completed his religious studies in Rome in 1969, and was ordained as a priest on August 3 of that year.[2] Ahmadu Bello, Premier of Nigeria's Northern Region, had offered him a scholarship to study abroad.[3]
Onaiyekan taught at St. Kizito's College, Isanlu in 1969. He became rector of St. Clement Junior Seminary in Lokoja in 1971. He finished his Licentiate of Sacred Scripture in 1973 and earned his doctorate in 1976.[2] He became Vice Rector of Ss. Peter & Paul in 1977.[2]
In a consistory to be held on November 24th, he will be appointed Cardinal of the Catholic Church by Pope Benedict XVI.
Posted by odia cyril at 07:27